Noah Kerner is a top business keynote speaker and current CEO at Acorns, the leading micro-investing and savings app for millennials. He also advises and invests in a variety of fast-growing startups, including Russell Simmons’ All Def Digital, Bond (acquired by Newell Rubbermaid), the Brita killer Soma, and WeWork, where he served for a period as interim CSO/CMO.

Noah Kerner is currently CEO at Acorns, the leading micro-investing and savings app for millennials. He also advises and invests in a variety of fast-growing startups, including Russell Simmons’ All Def Digital, Bond (acquired by Newell Rubbermaid), the Brita killer Soma, and WeWork, where he served for a period as interim CSO/CMO.

His background is colorful: Co-author of “Chasing Cool,” founder/CEO of three startups in three different industries and former DJ for Jennifer Lopez…all before 30.

A New York City native, Noah began his career as a DJ at age 14, spinning in nightclubs across the country, performing as stage DJ for artists like Jennifer Lopez, and appearing on The Today Show and The Tonight Show. In college, frustrated by the lack of access to DJ gear and Hip Hop culture, he founded the first online hip-hop portal.

Noah then went on to build the leading millennial agency, Noise. Before being acquired by Engine; Noise developed Facebook’s first app, the first credit card to reward fiscal responsibility for Chase, and the top branded game in the App Store. The company was featured twice on 60 Minutes as “the place to go to if you want to influence the choices of that fickle, unpredictable 20-something demographic.”

At 27, recognizing an opportunity at the intersection of music and branding, Noah launched his third company Soundproof in partnership with the world’s top music manager, Irving Azoff. Soundproof signed music producers like Quincy Jones, Babyface and David Foster for original commercial music production.

At 29, Noah’s first book, “Chasing Cool,” was published. Co-authored with creative visionary and co-CEO of fashion powerhouse Barneys, the book’s examination of business and popular culture is furnished with insights from 70 luminaries ranging from Clive Davis and Bob Pittman, to Ian Schrager and Tom Ford. Chasing Cool has been featured in such media as NPR, CBS News, Forbes, The Financial Times, Vanity Fair, GQ and was highlighted that year as one of Advertising Age’s “Top 10 Books You Should Have Read.”

Noah was featured as a “Top 30 Under 30” in Billboard Magazine, a Fast Company “Innovation Agent”, and one of AdWeek’s “Top 20 under 40”. He has keynoted conferences for Old Navy, Moet Hennessy, Fairchild Publications, and eBay; contributed editorial to Forbes, Advertising Age and Departures Magazine; and lectured on entrepreneurialism at NYU. Noah is a graduate of Cornell University where he studied Psychology and Economics.

The success that defines Noah’s eclectic journey stems from one thing: passion. Noah knows that innovation and leadership in any sector are impossible without a clear, heart-driven mission. It creates culture, defines brands, and it’s what resonates with consumers, especially that sometimes fickle generation of millennials that Noah has been quietly coaxing from behind the scenes for years. 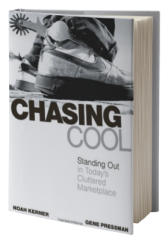