Knowing When to Take Risks

Knowing When to Say ‘NO'

The Power of Persistence

The Raspyni Brothers’ Key Accomplishments Include . . . Barry Friedman and Daniel Holzman are the Raspyni Brothers. As one of the most sought-after acts on the corporate entertainment scene, the Raspyni Brothers appear annually at over 100 events across America and internationally. Since 1982, their intelligent mayhem has earned them two International Juggling Championships, multiple appearances on the Tonight Show with Johnny Carson and Jay Leno, and a place in the Guinness Book of World Records.

In addition to the tremendous success the Raspyni Brothers enjoy in the field of corporate entertainment, these two unrelated siblings also tour as an opening act for dozens of superstars such as Robin Williams, Billy Crystal, Tony Bennett and Tom Jones. Other audiences have ranged from the King of Spain and the Academy Awards, to the sequestered O.J. Simpson jury.

The Raspyni Brothers have taken their twisted brand of Vaudevillian humor around the world, juggling comedy and skill in a perfectly balanced entertainment package for hundreds of clients including Monsanto, General Electric, Sprint, Toshiba, Olympus, Procter & Gamble, and Novell.

More About the Raspyni Brothers . . .
Whether posing as corporate managers, engaging an audience on the trade show floor, or performing their own headline comedy show, the Raspyni Brothers add excitement and energy to any corporate event. During their show, everyday objects come to life. Golf clubs balance in impossible configurations. Cabbages collide mid-air with flying blow darts while blazing torches and razor-sharp garden weasels spin effortlessly overhead.

Talking to a group about teamwork and team building is one option. However, engaging the group in a fun, hands-on workshop that will have them rolling in the aisle with laughter while learning these skills is a more desirable option. The Raspyni Brothers have mastered the latter. They are a living, thriving example of how even the most challenging goals can be exceeded when individuals work together to develop a strategy for success. The Raspyini Brothers pack their time on stage with a dynamic mix of character and charisma that never fails to win over even the most hard-to-please crowd.

You could put that responsibility into hands less-capable than the four-time World Juggling Champion Raspyni Brothers, with over 200 national television appearances and 1,000 successful corporate shows – but we don’t recommend it.

“You guys are the Google of comedy!”

“Fantastic! It’s a pleasure to watch you guys work.”

“The best Emcees we’ve had in conference history!”

“Throughout the show, you mixed a variety of comic dialogue while highlighting the importance of teamwork, time management, and competitive excellence – the foundations of our company’s success. Clearly the Raspyni Brothers are masters at blending unique audience participation, humor, and world class entertainment that leaves everyone cheering.” 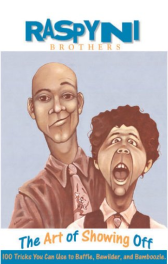