Mountain Get Out Of My Way: Lessons on overcoming adversity in life and business

Improving Communications and Productivity at Home and in the Office

Montel Williams earned his media celebrity status as an inspirational Emmy Award-winning television personality whom Americans invited into their homes for more than 17 years. He is a decorated former naval officer, inspirational speaker, author, entrepreneur and advocate for patients worldwide.

Shortly after being diagnosed with Multiple Sclerosis (MS) in 1999, Williams established the Montel Williams MS Foundation to further the scientific study of MS, provide financial assistance to select organizations and institutions conducting research, raise national awareness, and educate the public. The MWMSF has granted over $1.5 million dollars to research and has supported a study done at the Karolinska Institute in Sweden, which discovered an MS gene.

Over the years, Montel has been involved with many initiatives that are focused on improving the lives of people living with various brain impairments and injuries. He has personally participated in studies and trials surrounding non-invasive brain stimulation therapy with phenomenal results. He continues to work with researchers and the U.S. Army to further develop their findings with the hopes of helping soldiers who have experienced blast-related traumatic brain injuries.

Williams began his career in the public eye speaking at thousands of high schools across the Country and has always been a champion of public schools, public education and of the value in inspiring today’s students to be the leaders of tomorrow. He’s currently the face of the National School Board Association’s #StandUpForPublicSchools campaign which aims to raise awareness of the critical role of public education in American society as well as the incredible accomplishments of the Public School System despite underfunding, political interference and an increasing threat from those who advocate privatization.

Williams began his professional career in the US Marine Corps and was the first black Marine selected to the Naval Academy Prep School to then go on to graduate from the United States Naval Academy.

Williams earned a degree in general engineering and minoring in international security affairs. While serving in the military Williams’ was the recipient of two Meritorious Service Medals, two Navy Commendation Medals, and two Navy Achievement Medals and various other military related awards and citations.

Because of his military service and regard for those who serve, Montel has a special place in his heart for our servicemen and women. Montel serves on the board for Fisher House, an organization that provides free or low-cost lodging to veterans and military families receiving treatment at military. 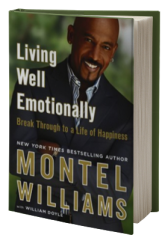