American Democracy in the Age of Trump

In Recovery from Digital Life: How Can We Become Human Again?

Why I'm a Christian: a 21st century Reflection on Faith

Andrew Sullivan – in a talk both autobiographical and meditative – explains how he remains a Christian in the modern world. As a gay man and an HIV survivor, Sullivan recounts how the Christian Gospel sustained and healed him in his darkest moments, even as the ...

Andrew Sullivan – in a talk both autobiographical and meditative – explains how he remains a Christian in the modern world.

As a gay man and an HIV survivor, Sullivan recounts how the Christian Gospel sustained and healed him in his darkest moments, even as the official Church often rejected him. His version of Christianity – mystical and modern, overlapping with Buddhist themes and rooted in humility and mercy – is, he argues an essential resource if humankind is to avoid catastrophe in the near future.

He argues for an acceptance of science and its discoveries; a rejection of Biblical literalism; and a focus on the core themes of Jesus of Nazareth: letting go, rather than holding on; giving rather than receiving; embracing the stranger and rejecting the tribe; and a preference for being over doing.

A Limited Defense of Inequality

The Case for Legal Marijuana: A Conservative Take

Contributing Editor at New York magazine, blogger, and author Andrew Sullivan is a popular source of provocative, astute political and social commentary. The Washington Post called him “a media pioneer,” and The New York Times said, “Andrew Sullivan might deserve to be remembered as the most influential political writer of his generation.”

Drawing from his award-winning writing, Sullivan addresses a range of topics, including inequality and human rights, Christianity and modern conservatism, civil liberties, the legalization of marijuana, and the effects of technology and digital media.

From 2000 to 2015, Sullivan chronicled every major political and cultural moment in real time on his blog, The Dish. During the blog’s life at Time, The Atlantic, and independently, he helped to legitimize and advance the medium by publishing 250 to 300 posts a week. In assessing his body of work, New York magazine said, “[T]he archive makes a case for Sullivan’s outsize influence on the politics of the new century.”

Joining New York magazine as contributing editor in 2016, Sullivan covers politics and culture, and occasionally writes features, such as his coverage of the 2016 Democratic and Republican National Conventions. Also in 2016, Sullivan announced two new books: Keeping the Faith, a spiritual memoir about the future and meaning of Christianity in the 21st Century, and a 30-year retrospective of essays, reviews and posts entitled Thinking Out Loud.

The New Republic’s youngest editor-in-chief, Sullivan was acknowledged for making the magazine more relevant to his generation. He was named Editor of the Year by Adweek and received multiple National Magazine Awards. After working for TIME and The New York Times Magazine, he served as a senior editor for The Atlantic.

One of its earliest activists, Sullivan set the gay rights movement’s agenda for the following two decades with the landmark works: 1995’s Virtually Normal: An Argument About Homosexuality and 1989’s “Here Comes the Groom: A (Conservative) Case for Gay Marriage.”

Sullivan argued for a conservatism based on practical restraint, individual freedom, constitutional norms, and skepticism in The Conservative Soul: Fundamentalism, Freedom, and the Future of the Right.

A practicing Catholic, he has challenged the Church’s position on gay life and addressed it several times in New York magazine. He is an Oxford graduate and received his PhD from Harvard University.

Sullivan is a regular panelist on Real Time with Bill Maher.

It was spectacular. Andrew was erudite, funny, charming, insanely intelligent and compelling, and just a really nice man. Though we have had standing ovations for musical performances before, the standing ovation he received from the audience was a first for a lecture!

The caliber of his talk ranks among the highest we’ve had the honor to sponsor here. 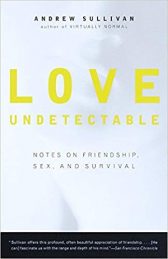 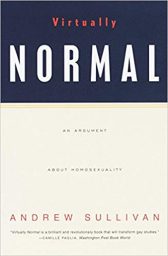