Ray Davis’s engagements focus on leadership at all levels of a company including leadership practices that motivate and inspire people, explain the need to find the next “revolution” companies will face before the revolution finds them, and that staying the same is not an option since the only constant is change. He also speaks on the importance of a healthy, productive company culture that will provide momentum for transformation that all companies are experiencing due to changing customer preferences.

Ray Davis, as president and CEO of Umpqua Holdings Corporation, pioneered a customer-centric banking strategy and culture that transformed his company and challenged the industry.

Davis recognized the opportunity to reimagine bank product delivery and customer experience, and set out to reinvent what a bank looks like, how it operates and how it engages the communities it serves. Today, the company continues to focus on combining technology and culture to create cutting-edge experiences across multiple channels that reflect changing consumer habits.

Since 1994, when Davis first joined as CEO, Umpqua has grown from six locations and $140 million in assets to more than 330 locations and $24 billion in assets. Today, Umpqua has a national and international reputation as one of the world’s most innovative banks. The company annually hosts dozens of banks and other companies from around the world who travel to study Umpqua’s unique culture and distinctive approach to design, service, and staffing.

In addition to the rapid growth under Davis’ leadership, Umpqua has been recognized in numerous national publications, including the Wall Street Journal, New York Times, Fast Company, and BusinessWeek, and CNBC for challenging the industry’s status quo and setting a new bar for banking. In addition, Davis has been named one of high finance’s twenty-five most influential people by U.S. Banker Magazine.

Davis chronicled Umpqua’s path to expansion and its success navigating the economic crisis in his books, Leading for Growth: How Umpqua Bank Got Cool and Created a Culture of Greatness and Leading Through Uncertainty: How Umpqua Bank Emerged from the Great Recession Better and Stronger than Ever. Both have been praised by business publications and leaders alike for their clear-cut take on innovation, leadership and navigating change.

“Ray Davis is that rare combination: a visionary with the straightforward voice of a pragmatist. He understands that today’s companies must be flexible, transparent, and customer centric.”

“Ray Davis is a leader for the 21st century. He understands that winning companies compete on ideas—ideas that shape the future of their industry and reshape the sense of what’s possible among customers, employees, and investors.” 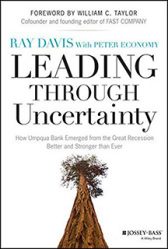 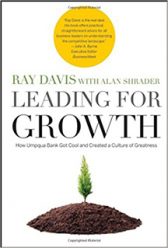