Creator of the "Famous Amos" Cookie and Best-Selling Author

Wally’s Watermelon Credo has become the guide by which he lives his life. He will share how the alphabets of Watermelon help him remember that What he believes creates his belief system – the basis for everything that happens in his life. He will share how Attitude has become the map that helps him navigate through all his life experiences. He will use children’s books to demonstrate how to be a better Team player. He will share personal examples why Enthusiasm really is the wellspring of life and how Respecting others will help build your own self-esteem. He will tell why Making commitments, saying, “I will,” will get much better results than saying, I’ll try.” He will show how to make Every day of your life a fun day. He will talk about why Love is the Answer and he will prove that the only way you can live life is One day at a time and that it truly is beneficial to absolutely Never, Never ever give up. After hearing Wally you will have no choice but to BE POSITIVE REGARDLESS.

Wally Amos has learned the greatest secret in life: You can be happy no matter what. Wally will share his inspiring collection of “recipes” and tell you how adversarial situations are often blessings in disguise. The lessons we learn in life sometimes come from the...

Wally Amos has learned the greatest secret in life: You can be happy no matter what. Wally will share his inspiring collection of “recipes” and tell you how adversarial situations are often blessings in disguise. The lessons we learn in life sometimes come from the most unexpected places!

Seeds of Wisdom, Slices of Life

Hawaii’s beloved “Cookie Man” focuses on helping people to shed the cultural stereotypes and myths that often cloud their decisions and misdirect their actions. Emphasis is placed on getting in touch with the truth of who we are now versus what we’ve ...

Hawaii’s beloved “Cookie Man” focuses on helping people to shed the cultural stereotypes and myths that often cloud their decisions and misdirect their actions. Emphasis is placed on getting in touch with the truth of who we are now versus what we’ve been in the past. Participants will realize that each of us creates our own belief system and will learn how to transform the negative beliefs they may have into positive ones while simultaneously unlocking their inner power.

“The face that launched a thousand chips,” Wally Amos is the father of the gourmet cookie industry. As inventor of “Famous Amos” cookies, his story is the quintessential American success story.

The “Famous Amos” cookie tale began when the talent agent began using his bite-sized cookies as a calling card. At the urging of his friends and clients, he launched the Famous Amos Cookie Company in 1975 with a Sunset Boulevard storefront in Hollywood. The business grew and in 1985, Famous Amos cookies were a $10 million business. Great products are not built on great taste alone, and Famous Amos’ success is as much due to Wally’s infectious enthusiasm and tireless promoting as it is to the cookies’ delicious taste.

While he left the brand after it changed hands several times between 1985 and 1998, he never lost his entrepreneurial zeal or passion for baking and promoting. Wally Amos’s most recent ventures now are a Long Island-based Uncle Wally’s Company, which specialized in a full line of muffins, and the Orlando-based Aunt Della’s Cookies, named for the woman who taught him, as a youngster, the art and love of making cookies.

Before his cookie foray, Wally Amos did stint in the Air Force (where he earned his GED), and at Sak’s in New York. He then joined the William Morris Talent Agency and worked his way up to become the firm’s first black agent. While at William Morris, Wally represented The Supremes and Marvin Gaye, and he is credited for signing a then-unknown duo named Simon & Garfunkel.

Wally has appeared on hundreds of television and radio shows, appeared in various network sitcoms and acted as spokesman for Hush Puppies, United Airlines and the California Egg Board. He is host and teacher of 50 adult basic learning programs on PBS, and has authored four books, his most recent being “The Cookie Never Curmbles, Inspirational Recipes for Everyday Living.”

In addition to his business, Wally Amos devotes a great deal of time and passion for literacy causes, serving as national spokesman for the Literacy Volunteers of America and acting as a board member for the National Center for Family Literacy and Communities in Schools.

Wally Amos, 67, has been married for 27 years to his wife, Christine.

Well, what can I say? Tremendous, fantastic, wonderful, entertaining, delightful, fun, moving, heartwarming, talented, just what I wanted? Yes—to all that and more! Of course, I’m not surprised. That’s why I wanted you back.

You wowed us like we have never been wowed before! Inspiring, awesome, unbelievably sensitive, dynamic, thrilling and sensational are but a few of the words I heard uttered from the audience as they spoke about the luncheon keynote speaker—Wally Amos.

Dear Wally, Your luncheon presentation was wonderful! You definitely went above and beyond my expectations when you stayed the course in the CU Store signing your books until the absolute last one was sold. You are truly an inspiration. 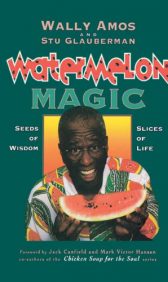 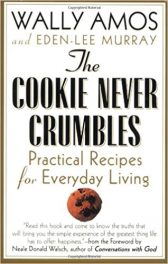