One of the UK's leading Economists

Money in the Great Recession: Did a Crash in Money Growth Cause the Global Slump?

Money in a Free Society: Keynes, Friedman, and the New Crisis in Capitalism

Tim Congdon is an economist and businessman, who for over 30 years has been a strong advocate of sound money and free markets in the UK’s public policy debates. He is a controversial figure in British economic policy-making, because of his consistent advocacy of the importance of money and banking to macroeconomic outcomes.

Tim founded the economic research consultancy, Lombard Street Research, in 1989 and was its managing director from then until 2001. He was a member of the Treasury Panel of Independent Forecasters (the so-called “wise men”) between 1992 and 1997, which advised the Chancellor of the Exchequer on economic policy.

His latest works are a pamphlet on How to End the Recession, published jointly by the CSFI (Council for the Study of Financial Innovation) and Lombard Street Research a short book (of about 50,000 words) on Central Banking in a Free Society, which is largely a response to the banking crises of 2007 and 2008, published by the Institute of Economic Affairs in 2009.

Tim’s long-term project is a book, Money in a Modern Economy, which will bring together his views on how an economy with a central bank and commercial banking system works.

Since May 2008, he has been the economic correspondent for Standpoint magazine and is a long a self-proclaimed Eurosceptic. In January 2011 Tim became the Hon. Chairman of The Freedom Association. He is on the Advisory Council of Reform. 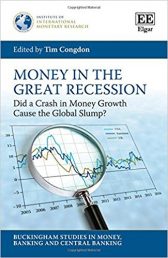